We have now spent 2 full days in Hong Kong and the surrounding areas. As you all know, me and Goose are not exactly what you call "planners." We basically looked up some things we thought might be interesting and went to that general area and explored. We can only use our phones when we have wi-fi, so once we leave the hotel, we are kinda just wingin it.

We do have paper maps and I have found using the MTR (which is HK's mass transit subway system) is pretty easy. It takes you everywhere you could possibly want to go around here and a station is only a couple blocks from our hotel. All the major signs in Hong Kong are in English and Chinese so finding our way around isn't too bad. 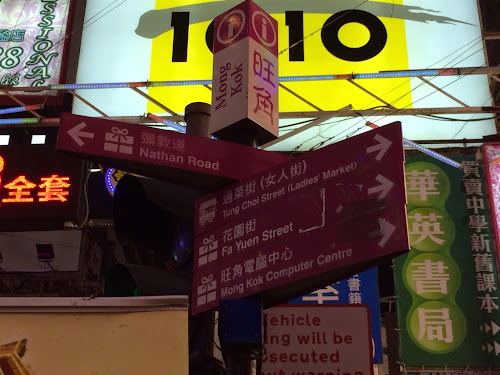 Soooooo many people... everywhere... at any given time. Even when we were out Wednesday night, people everywhere. Goose says the Central and Causeway Bay aeas in Hong Kong are very much like New York City and I would say similar to parts of LA/ Beverly Hills as well, lots of upscale brand stores and people walking everywhere... very quickly. The people don't look nearly as superficial as they did on Rodeo Drive though... I felt a lot more comfortable here than in LA.

Not a whole lot of ethnic diversity in most areas, nothing like the US (especially Georgia). It made me appreciate home a little more though, getting to grow up around people of all different skin, hair,
eye colors, different languages, accents... No one type of look is
"American" and it is harder to spot a tourist in the states.

But in China, you could spot us from a mile away.

In the more upscale areas there is a better mix of nationalities. But mostly asian, middle eastern, and european. White and black people stick out big time, and the very few we ran into weren't American, but either European or Australian.

Many people in customer service jobs like in restaurants/ hotels/ stores speak a little english and if not, hand gestures and calculators helped us out with communication. We did have an incredibly frustrating cab ride with a guy who did not know the street we were trying to get to. He ended up calling someone and trying to have them translate.

Language barriers are not fun.

3. Fashion: Asian fashion is awesome. Everyone from babies to 80 year old women dress kinda like hipsters. No one matches anything and they always look kinda frumpy. Big contrast from Georgia's southern matchy-matchy, big hair and heavy make-up, bright/patterned everything style...  hardly anyone looks "put together".

I fit in great.

Chuck Taylors are really popular with the teens, and hardly any one has facial hair... Goose totally sticks out with his beard and long curly hair.

4. Weather: it's like 75 degrees everyday this time of year and the humidity is high, but everyone still dresses very modestly. Even in the big city areas, shorts and tank tops are rare. Most people are wearing pants and long sleeved shirts.


5. Atmosphere: I feel 1000x safer in this city than I ever have in Atlanta. Even on the MTR, there are young girls and older kids riding by themelves all over the place. I spent 2 days while goose was at work just exploring the area by myself and didn't feel nervous at all.

Found out I am not a fan of the taste of jasmine on our first day. The soup I ordered was some kind of jasmine mint dumpling concoction and I almost had to spit it out.  It tasted like plain dough on the outside filled with crushed up jasmine tea leaves. The taste and consistancy were just not good. Other than that though, I've enjoyed the food. We ate a lot of dim sum and drank tea. Hot tea is served autmatically in most places... I am not a big hot tea drinker
but I got used to it after a few meals... and I found a few flavors I enjoyed. (I am really, really missing my daily sweet ice tea though).

Biggest difference (other than the food itself) I have noticed was how they wait tables. You sit down and they give you a menu... and then you are on your own. You have to get their attention usually by just raising your hand for them to come over. They will bring
your food and clear your dishes but not bother you again unless you raise your hand.

This took some getting used to for sure...we are so used to American servers coming over to check on you every couple of minutes. Kinda nice though... you never feel rushed during your meal, BUT when you say you are ready for the check, they bring it and stand right by you and wait for you to sign and take the receipt. Then I feel like they expect you to leave. 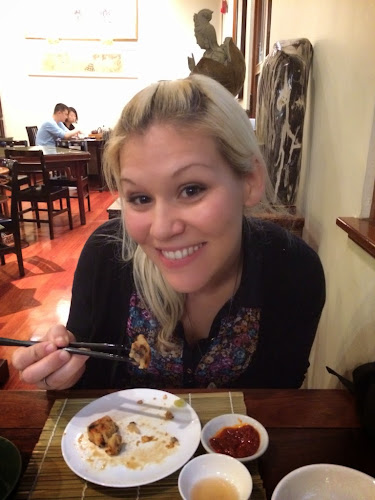 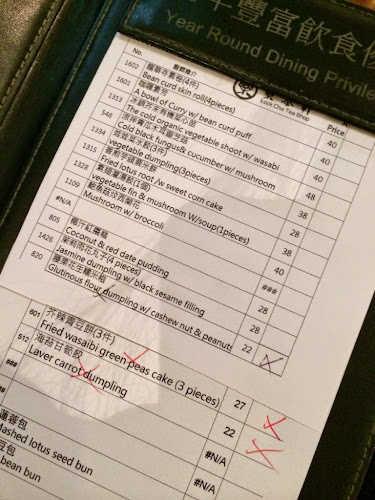 7. Locals are not really friendly... not unfriendly, but it is very rare to get a smile from anyone. And the older people especially will just stare at ya like it ain't no thing.

Hong Kong dollars are worth about 8 times less than American, so everywhere we go we feel like we are ballin' - ha! Went shopping and the total was like $580.00. (which was like $75 US)... good times.

There are stores everywhere. Clothing, food, and every other kind of product you can think of. I guess with a billion people to support, you need a lot of options, but seriously... there is a mall every 50 feet. It's insane.

The arts are not a big part of the city, handmade is almost non-existant (although there is a small movement happening there). I did happen upon a trendy little area with a few interesting shops/art galleries. Very small part of the culture though...

We were walking around yesterday after church (which was awesome) and all of a sudden turned a corner into this area with women everywhere: wearing head coverings, sitting all over the sidewalks on blankets, shoes off... some selling things, some just hanging out. 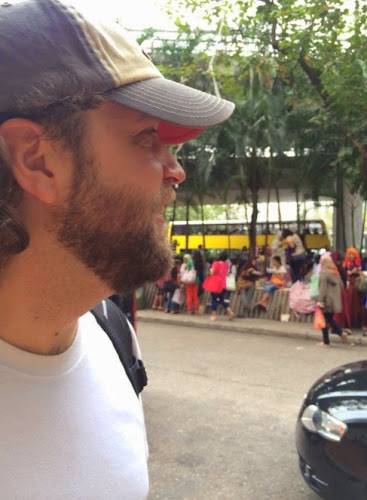 I mean they were EVERYWHERE. Then we walked into Victorias Park and they were everywhere there too. It was just odd because it was ALL women. I mean Goose stood out like a sore thumb and probably felt like a giant because most of these women were about 6 inches shorter than me (I am 5'1"). 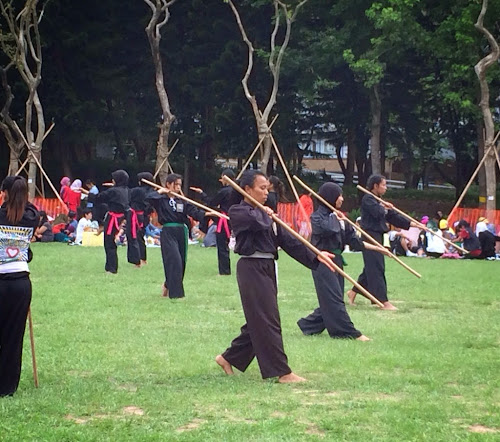 I can definitiely see why the parks are popular... there isn't a lot of places to stretch out and feel grass under your feet in the city. 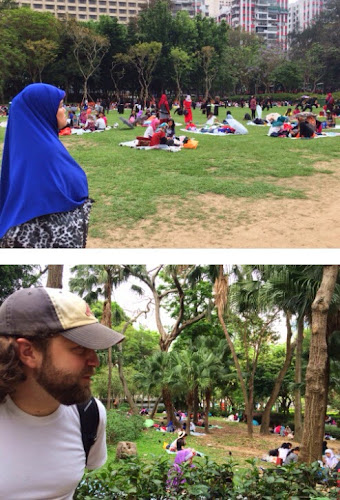 As we walked through the park, we came across several areas where muslim women were praying and some other kinds of religious services going on. We passed by a group of all asian men by themselves in suits reading and praying.

Then, on the other side of the park there was a christian church festival going on for Easter.

We knew what it was immediately because it looked exactly like one of our church festivals except of course, everyone was Asian and speaking Cantonese- and this was the only area in the park where men, women, and children were together. There were tents popped up with games and face painting... some performers singing and dancing to worship songs... and the church volunteers all wearing Jesus loves you tshirts... we felt right at home even though we couldn't understand anyone.

And hearing Amazing Grace in another language... awesome.

Very interesting experience, which we had simply by walking around without a clue.


Sometimes NOT having a plan is the very best plan to have.