Lily and the Terrible, Horrible, No Good, Very Bad Day 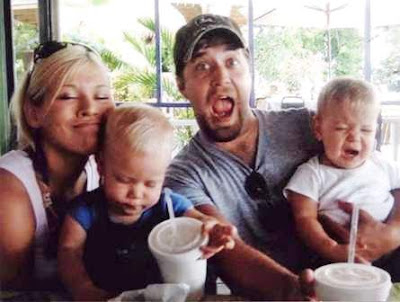 I stayed up way too late and overslept which made me wake up with a terrible headache. At breakfast Ty spilled Reese's cereal which cause Reese to FREAK. Then right after I cleaned up the mess... Ty spilled his full cup of milk... all over his clothes so he had to get dressed... again. I could tell it was going to be a terrible, horrible, no good, very bad day.

I think I'll move to California.

As I was washing a cup in the sink, the water just shut off. So I called my lovely husband and asked why the water stopped... his response? Oops. He forgot to pay the water bill... So instead of a much needed shower... I brushed my teeth with a bottle of water, cleaned my face with a baby wipe and pull my greasy hair in to a ponytail.

It was turning into a terrible, horrible, no good, very bad day.

I told Goose I was moving to California.


On the way to pay the water bill, I forgot the address. I took a wrong turn and said "Dang it" and then had to endure a 15 minute lecture from my 4 year-olds on how we don't say, dang it. "That is not a nice word mommy." I finally got to the place and payed the bill... along with a $30.00 reconnection fee. I hate paying extra fees.

Next week, I'm on my way to California.

I dropped the kids off and realized Reese had two different shoes on and I didn't bring any extra diapers for him... I worked for a couple hours then remembered Goose said I had to get the oil changed. So I went to the Nissan dealership and waited for an hour as they change it. The lady checks me out and says ok, that will be $36.oo. After explaining that it is included in my plan I had to wait another 45 minutes for them to redo the paperwork... which had me leaving in rush hour traffic to drive home.

I was definitely having a terrible, horrible, no good, very bad day.

I stopped by the store on the way home and Nolan yells in front of everyone, "Mom I am about to POOP in my pants. Right now!!" So I run them into the bathroom and let Nolan go as Reese gets on his belly and tries crawling under the door into an OCCUPIED stall.

I told the lady I was having a terrible, horrible, no good, very bad day...

she didn't seem to care.


They were out of the 3 items I went in to get (green cabbage, Inviga, and wheat bread... seriously.) I bought headphones for my MP3 player that were the wrong size and I couldn't go running because it started raining on my way home. perfect.


I wonder if it's raining in California.


I finally made it home and wanted to catch up with some blogs and check my emails. My laptop wouldn't turn on. It is broken. Goose said I am no longer allowed to touch any of his computers. I said don't worry,


I'll find one to use in California.


My favorite show (LOST) didn't come on, the scale said I gained 2 pounds, and I went to bed with the same headache I woke up with. I told Goose it was terrible, horrible, no good, very bad day. 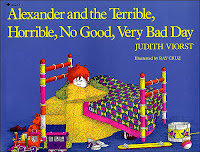